In Boulogne-Sur-Mer, a north of France harbour, during WW1 on the site of Nausicaa (National sea life center) was a Casino the “palais de Neptune” (Neptune’s palace) inaugurated in 1825 and facing the sea. This Casino was very successful with numerous British customers, games being then forbidden in England… Some years later will continue to attend the place but in a more dramatical situation.

In fact, during the war, play mates and casino roulettes were replaced by beds, this place becoming in March 1918 “Hospital N°13”, hundreds of wounded soldiers flood in the rooms converted in operation theaters, Laboratories, bedrooms. At the peek of that war period, nearly a thousand were healed in that temporary hospital.

An American military doctor Harvey Cushing (1869-1939) will practice there and will become 20th century greatest neurosurgeon, his name is forever known with the Cushing’s syndrome due to the production of excessive cortisol by the adrenal glands. He attained the rank of Colonel in the Army Medical Corps on October 23, 1918 and in 1923 was awarded the Distinguished Service Medal.

During his residency in the military hospital in Boulogne-Sur-Mer, H. Cushing tried the use of electromagnet to remove shrapnel from brain.

In his diary he wrote: “Hospital N°13 is typical of the over-seas British hospitals. Commodities are scarce, stewardship poor. Workload, even if variable, is too heavy, in one day there is as many admissions as in one month in the American hospital in Neuilly (near Paris) … In the huge restaurant room of the Casino which contains 200 beds with heavy casualties nail to bed we have only 3 or 4 nurses and as many stretcher bearers. Compare with the Neuilly hospital with 162 subacute or chronic patients where we have 1 nurse and 1 stretcher bearer for 10 or 12 beds!”

Cushing returned to the United States in February 1919 and was discharged on April 9 of the same year… He died on October 7, 1939 in New Haven, Connecticut, from complications of a myocardial infarction at the age of 70. 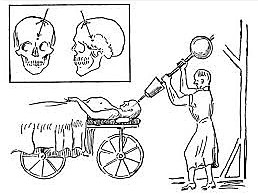